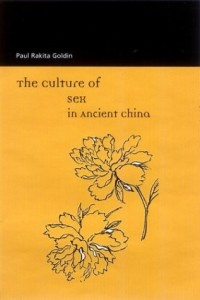 Book Description
The subject of sex was central to early Chinese thought. Discussed openly and seriously as a fundamental topic of human speculation, it was an important source of imagery and terminology that informed the classical Chinese conception of social and political relationships. This sophisticated and long-standing tradition, however, has been all but neglected by modern historians. In The Culture of Sex in Ancient China, Paul Rakita Goldin addresses central issues in the history of Chinese attitudes toward sex and gender from 500 B.C. to A.D. 400.

A survey of major pre-imperial sources, including some of the most revered and influential texts in the Chinese tradition, reveals the use of the image of copulation as a metaphor for various human relations, such as those between a worshiper and his or her deity or a ruler and his subjects. In his examination of early Confucian views of women, Goldin notes that, while contradictions and ambiguities existed in the articulation of these views, women were nevertheless regarded as full participants in the Confucian project of self-transformation. He goes on to show how assumptions concerning the relationship of sexual behavior to political activity (assumptions reinforced by the habitual use of various literary tropes discussed earlier in the book) led to increasing attempts to regulate sexual behavior throughout the Han dynasty. Following the fall of the Han, this ideology was rejected by the aristocracy, who continually resisted claims of sovereignty made by impotent emperors in a succession of short-lived dynasties.

Erudite and immensely entertaining, this study of intellectual conceptions of sex and sexuality in China will be welcomed by students and scholars of early China and by those with an interest in the comparative development of ancient cultures.

Review
“A unique and significant contribution to the field, this is a catalytic work that should be widely read, strongly contested, and deeply appreciated.” –Journal of the American Academy of Religion, Winter 2004

“Goldin’s thinking is creative, and he writes and translates with an ease, clarity, and fluency that many of us can only aspire to emulate.” –Journal of Asian Studies, November 2002

“The book elucidates the beginnings of a tradition of relationship between the sexual imagery and political and state affairs that is noticeable throughout Chinese literary thinking until the most recent times, and as such this study can be recommended to students in Chinese history, literature, philosophy and gender studies.” –Archiv Orientalni 72 (2004)

About the Author
Paul Rakita Goldin teaches Chinese history and philosophy at the University of Pennsylvania.