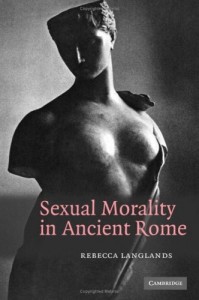 Book Description
Traditionally, scholars have approached Roman sexuality using categories of sexual ethics drawn from contemporary, Western society. In this book Dr Langlands seeks to move away from these towards a deeper understanding of the issues that mattered to the Romans themselves, and the ways in which they negotiated them, by focusing on the untranslatable concept of pudicitia (broadly meaning ‘sexual virtue’). She offers a series of nuanced close readings of texts from a wide spectrum of Latin literature, including history, oratory, love poetry and Valerius Maximus’ work Memorable Deeds and Sayings. Pudicitia emerges as a controversial and unsettled topic, at the heart of Roman debates about the difference between men and women, the relation between mind and body, and the ethics of power and status differentiation within Roman culture. The book develops strategies for approaching the study of an ancient culture through sensitive critical readings of its literary productions.

Review
‘For historians, therefore, the study of ethics is now the study of a basic building block of the Greek and Roman world, and Langlands … [has] made a major contribution to the field. It has a sophisticated sense of how, as Langlands puts it, ethics locate individuals in a network of relationships, regulating their interaction in ways which may complement, problematize or undermine coexisting structures.’ — Times Literary Supplement

About the Author
Rebecca Langlands is Lecturer in Classics at the University of Exeter.