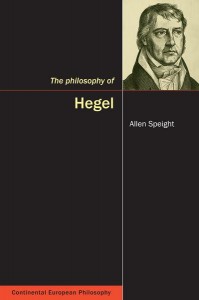 书名: The Philosophy of Hegel (Continental European Philosophy)
作者: Allen Speight (Author)
出版社: Acumen Pub Ltd (April 30, 2008)
语言: English
ISBN-10: 0773534083
ISBN-13: 978-0773534087
Book Description
Speight begins with the young Hegel and his writings prior to the Phenomenology, focusing on the notion of positivity and how Hegel’s social, economic, and religious concerns became linked to systematic and logical ones. He then examines the Phenomenology in detail, including its treatment of scepticism, the problem of immediacy, the transition from “consciousness” to “self-consciousness”, and the emergence of the social and historical category of “Spirit”. Other chapters explore the Logic, paying particular attention to a number of contested issues associated with Hegel’s claims to systematicity and the relation between the categories of Hegel’s logic and nature or

spirit (Geist). The final chapters discuss Hegel’s ethical and political thought and the three elements of his notion of “absolute spirit” – art, religion, and philosophy – as well as the importance of history to his philosophical approach as a whole.

Review
“An outstanding book. It demonstrates a wide and deep knowledge of Hegel and modern Hegel scholarship and an evident enthusiasm for the study of Hegel’s ideas. Speight is a sure-footed interpreter of Hegel’s texts and his selection of particular topics cannot be faulted. It is a pleasure to read.” – Dudley Knowles, University of Glasgow

About the Author
Allen Speight is associate professor of philosophy at Boston University.波士顿大学教授。