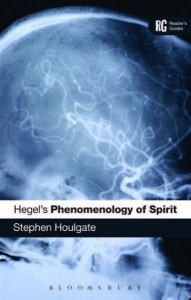 Book Description
Hegel’s Phenomenology of Spirit is probably his most famous work. First published in 1807, it has exercised considerable influence on subsequent thinkers from Feuerbach and Marx to Heidegger, Kojève, Adorno and Derrida. The book contains many memorable analyses of, for example, the master / slave dialectic, the unhappy consciousness, Sophocles’ Antigone and the French Revolution and is one of the most important works in the Western philosophical tradition. It is, however, a difficult and challenging book and needs to be studied together with a clear and accessible secondary text. Stephen Houlgate’s Reader’s Guide offers guidance on:

Review
“’Stephen Houlgate is one of the best and most respected Hegel scholars, and this is one of his best books: it is clear, helpful, and shows a deep understanding of Hegel’s notoriously difficult text. For anyone seeking to get to grips with the Phenomenology, this will be an indispensable resource.’” – Robert Stern, Professor of Philosophy at the University of Sheffield, UK. ,

“‘Concentrating on reconstructing the underlying logic of Hegel’s arguments in the Phenomenology of Spirit, Stephen Houlgate provides an exceptionally clear introduction to this notoriously difficult work. Houlgate’s introduction will be especially useful for both students and specialists because it is lucid and concise, yet always remains closely related to the text and rests on impressive scholarship.’” – Alison Stone, Reader in European Philosophy at Lancaster University, UK. ,

“Stephen Houlgate’s guide is undoubtedly based on years of patiently guiding students through the Phenomenology at Warwick University and this pedagogical intent is its great strength and virtue. It concentrates on the first four chapters of Hegel’s book and succeeds admirably in setting out how the logical nature of the arguments unpack themselves. This allows the reader to concentrate on the task of following what Hegel is saying in particular paragraphs without having to grapple with larger questions of interpretation.” – Sean Sheehan, Irish Left Review

About the Author
Stephen Houlgate is Professor of Philosophy at the University of Warwick. He is the author of An Introduction to Hegel’s Philosophy. Freedom, Truth and History, 2nd Ed (Blackwell, 2005) and The Opening of Hegel’s Logic (Purdue UP, 2006), the editor of The Hegel Reader (Blackwell, 1998) and Hegel and the Arts (Northwestern UP, 2007), and co-editor (with Michael Baur) of A Companion to Hegel(Wiley-Blackwell, 2011).