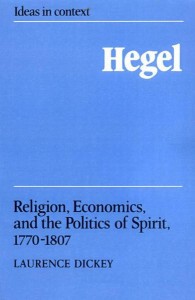 Book Description
This major study of Hegel’s intellectual development up to the writing of The Phenomonology of Spirit argues that his work is best understood in the context of the liberalisation of German Protestantism in the eighteenth century.

Review
“The scholarship with which Dickey presents his case is remarkable for both its depth and its range: his account of German protestantism, for example, involves a discussion of the theological doctrines of St Clement, St Augustine and Pelagius, and, despite his scepticism about the Kant-Fichte-Schelling-Hegel succession, these philosophers, among others, all receive their due. Dickey also reflects continuously on his own intellectual procedures, and provides much insightful discussion of historical methodology. Yet despite all this, he never loses his sense of direction or lapses into unreadability. His book is a remarkable one and will prove indispensable to Hegel specialists, but also of great interest to historians of ideas in general.” – Michael Inwood, The Times Literary Supplement