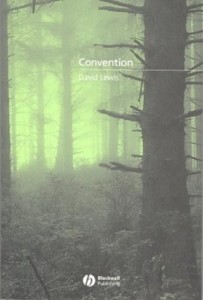 Book Description
Convention was immediately recognized as a major contribution to the subject and its significance has remained undiminished since its first publication in 1969. Lewis analyzes social conventions as regularities in the resolution of recurring coordination problems – situations characterized by interdependent decision processes in which common interests are at stake. Conventions are contrasted with other kinds of regularity, and conventions governing systems of communication are given special attention. This book is of central importance to philosophers, linguists, social scientists, legal theorists, and anyone interested in the role of convention in the function of social behavior and language.

“Readers will be indebted to the author of this book.” — Philosophical Quarterly

“The notion of convention has served philosophers since Aristotle as a convenient exploration of the arbitrary character of referential word meaning. In 1936 Willard Quine, pursuing the notion of analyticity, called attention to the emptiness of this explanation. David Lewis has attempted to re-establish the notion of convention as a partial explanation of analytic truth [and his] explication of “convention” is a tour de force of Humean analysis.” — Philosophy and Rhetoric

“This book has been published for quite some time. Its significant contribution is no longer in question [and it will] remain a central reference for discussions on the nature of conventions. An excellent book for teaching purposes.” — Australasian Journal of Philosophy

About the Author
David Lewis (1941–2001) was Professor of Philosophy at Princeton University. His publications include Counterfactuals (reissued by Blackwell 2000), On the Plurality of Worlds (reissued by Blackwell, 2000), Parts of Classes (1991), and numerous articles in metaphysics and other areas. Many of his writings are available in his Collected Papers.