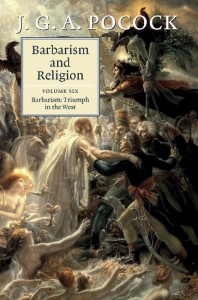 Book Description
This sixth and final volume in John Pocock’s acclaimed sequence of works on Barbarism and Religion examines Volumes II and III of Edward Gibbon’s Decline and Fall of the Roman Empire, carrying Gibbon’s narrative to the end of empire in the west. It makes two general assertions: first, that this is in reality a mosaic of narratives, written on diverse premises and never fully synthesized with one another; and second, that these chapters assert a progress of both barbarism and religion from east to west, leaving much history behind as they do so. The magnitude of Barbarism and Religion is already apparent. Barbarism: Triumph in the West represents the culmination of a remarkable attempt to discover and present what Gibbon was saying, what he meant by it, and why he said it in the ways that he did, as well as an unparalleled contribution to the historiography of Enlightened Europe.

About the Author
J. G. A. Pocock was educated at the Universities of Canterbury and Cambridge. He is now Harry C. Black Professor of History Emeritus at Johns Hopkins University and an Honorary Fellow of St John’s College, Cambridge. His many seminal works on intellectual history include The Ancient Constitution and the Feudal Law (1957, second edition 1987),Politics, Language and Time (1971), The Machiavellian Moment (1975, second edition 2003), Virtue, Commerce and History (1985), Political Thought and History (2009), and five previous volumes in the Barbarism and Religion sequence, initiated in 1999. He has also edited The Political Works of James Harrington (1977) and Burke’s Reflections on the Revolution in France (1987), as well as the collaborative study The Varieties of British Political Thought (1995). A Corresponding Fellow of the British Academy and of the Royal Historical Society, Professor Pocock is also a member of the American Academy of Arts and Sciences and of the American Philosophical Society. He was appointed an Officer of the Order of New Zealand Merit in 2002.