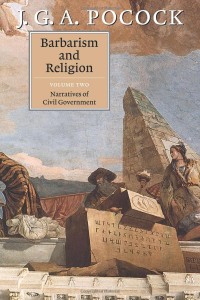 Book Description
The second volume of Barbarism and Religion explores the historiography of Enlightenment, and looks at Gibbon’s intellectual relationship with writers sucah as Giannone, Voltaire, Hume, Robertson, Ferguson and Adam Smith. Edward Gibbon’s intellectual trajectory is both similar but at points crucially distinct from the dominant Latin “Enlightened narrative” these thinkers developed. The interaction of philosophy, erudition and narrative is central to enlightened historiography, and John Pocock again shows how the Decline and Fall is both akin to but distinct from the historiographical context within which Gibbon wrote his great work.

‘… the grandeur of Pocock’s conception amazes, but it is often the asides and apercus that linger longest in the mind.’ – David Armitage, Lingua Franca

‘Thus we come back to the English Protestant Enlightenment and the point from which John Pocock set out on his magnificent tour de force.’ –Nicholas Tyacke, The Times Literary Supplement