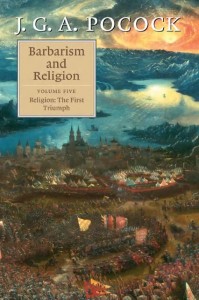 Book Description
This fifth volume in John Pocock’s acclaimed sequence on Barbarism and Religion turns to the controversy caused by Edward Gibbon’s treatment of the early Christian church. Examining this controversy in unprecedented depth, Pocock challenges the assumption that Gibbon wrote with the intention of destroying belief in the Christian revelation, and questions our understanding of the character of ‘enlightenment’. Reconsidering the genesis, inception and reception of these crucial chapters of Decline and Fall, Pocock explores the response of Gibbon’s critics, affirming that his reputation as an unbeliever was established before his history of the Church had been written. The magnitude of Barbarism and Religion is already apparent. Religion: The First Triumph will be read not just as a remarkable analysis of the making of Decline and Fall, but also as a comment on the collision of belief and disbelief, a subject as pertinent now as it was to Gibbon’s eighteenth-century readers.

About the Author
J. G. A. Pocock was educated at the Universities of Canterbury and Cambridge, and is now Harry C. Black Emeritus Professor of History at The Johns Hopkins University.